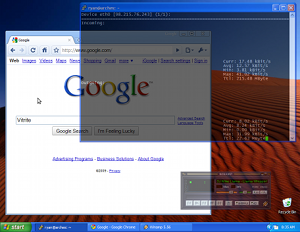 Vitrite is a small Windows utility that allows you to manually adjust the level of transparency for almost any visible window. It does this by utilizing a capability present in Windows for variable window transparency.

It was created by me, Ryan VanMiddlesworth. And like most of my projects, I did it for fun.

When executed, Vitrite minimizes to the system tray in the lower right corner of the screen. If you wish to make a window transparent, you simply bring the window into focus (i.e. click on it) and press Ctrl Shift [any number on the top row on the keyboard]. There are 9 different levels of transparency: 1=10% opaque, 9=90% opaque, and everything in between.

Vitrite also has the ability to toggle a window's "always on top" flag. Just press Ctrl Shift + (that's the plus sign) and it will make the active window float on top of the other windows. Press it again to reverse this behavior.

Vitrite was written in C and is licensed under the GNU General Public License. If you'd like to receive the source code to Vitrite under a non-GPL license, contact me and we'll work something out.

A.K.A. "Paying for Stuff You Thought Was Free"

Vitrite is open source. That means the source code that I wrote to create Vitrite is freely available. So that's pretty cool I think. That said, I am not rich (alas, not even close); so let us discuss "tipping".

then please consider forgoing that purchase, and throw a tip-sized donation my way instead. It's easy, just click the "Donate" button below. I'm sure my kids probably need some new shoes or something right now...

Since Vitrite is licensed under the GPL, the source code is also freely available. Vitrite was written in C and originally developed in Microsoft Visual Studio 6.0. However, because I am an addict of all things new and shiny (that's why I wrote Vitrite), I have since upgraded to Visual Studio .NET. The source code will therefore be available as a MS Visual Studio .NET solution. This does not mean that Vitrite uses Microsoft's .NET framework - it doesn't, Vitrite was written entirely in pure C.

There are a couple of issues that you may or may not be interested in knowing about Vitrite: